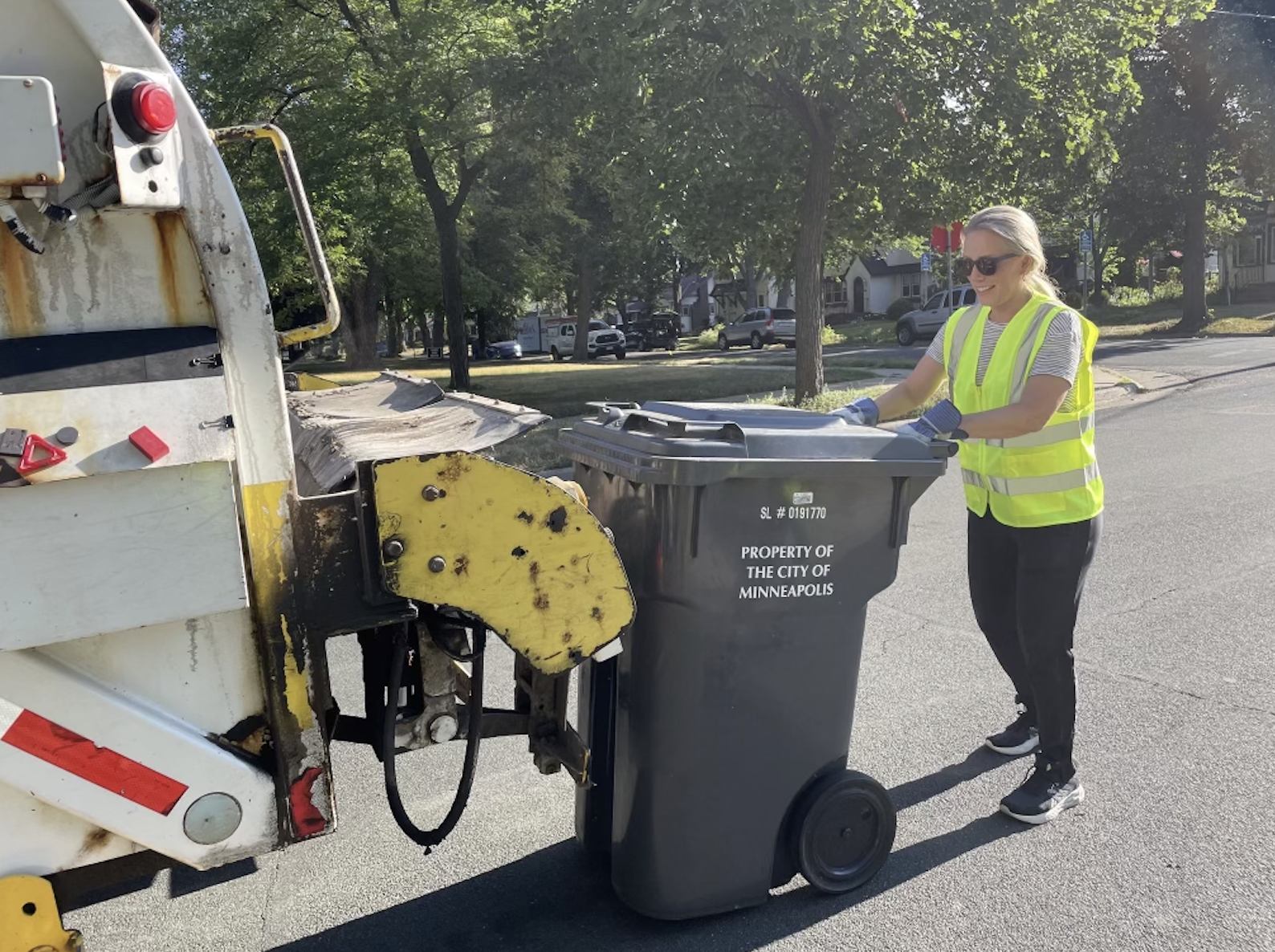 Ward 11 Councilmember Emily Koski assisting with garbage pick-up on July 26. Photo courtesy of the City of Minneapolis, who is hiring in the Solid Waste & Recycling Department if you want to do the same.

The City Council is holding a special meeting on Friday to work through a backlog of rezoning applications allowed under the 2040 Plan. The backlog includes buildings at 5121 and 5129 France Ave. S.

Why the special meeting? Yesterday, Hennepin County District Judge Joseph Klein granted city officials a reprieve that allows the city to enforce the 2040 Plan. The city's appeal of Klein's earlier ruling, which effectively paused any project allowed under the 2040 Plan, is still being sorted out.

If you are a Dunn Brothers frequenter, you may have been surprised to see Jones Coffee suddenly appear at the Fulton and Linden Hills locations. What is Jones Coffee and what did it do with the brothers Dunn? Charlie has the answer.

Important detail – they'll be carrying some great new local food, including bagels from Bagel Taïm that Charlie thinks are some of the best in town along with baked good from Mother Dough, Two Daughters, and Sift.

Yesterday we published a response to Cecelia's community post about how the city coordinator's appointment reflected the city leadership's commitment to the status quo.

"People have complicated views that are not easily categorized.. Some of these complications can be seen in the result of actual choices people make rather than theories that activists promote," Laura Russ, a resident of Minneapolis, writes.

A few months ago, New Gild published an ad in Southwest Voices about a wedding giveaway. Check out the story with some darling photos of how the wedding went. (New Gild)

How do you pronounce Nicollet? (Racket)

Research shows that having Black teachers helps Black youth succeed. MPR hosted a discussion with four local Black male educators about the important of having Black male teachers in classrooms and why Black men make up less than 10% of teachers nationwide. (MPR News)

HourCar added 100 electric vehicles to its fleet in Minneapolis, available in areas of environmental concern on a first-come, first-served basis. (Sahan Journal)

The City of Minneapolis is holding three community listening sessions in August regarding the future of the Minneapolis Police Department, starting on Aug. 3 in Whittier. (WCCO)

Ward 11 Councilmember Emily Koski and her Senior Community Group are launching a pilot program with Senior LinkAge Line® services to help people stay connected to services and supports available to help them stay in their homes as they age. To get involved, or for more information, email Ward 11 Community Outreach Intern Ruwada Issa: ruwada.issa@minneapolismn.gov.

Take a guided stroll with a Park Board naturalist through Loring Park today, and every Wednesday this summer, from 11 a.m. - noon. Meet in front of the Loring Community Arts Center, in the park off 14th & Willow.

All aboard! You can ride the actual streetcar line that Josh Biber featured in his streetcars of Southwest article with Conductor Leah Harp from 6:30 - 8:30 p.m. (check out the whole schedule of rides).

Órale, a veteran-owned Mexican restaurant in Tangletown, hosts a comedy open-mic night, every Wednesday at 8 p.m. (The food is really good, btw)